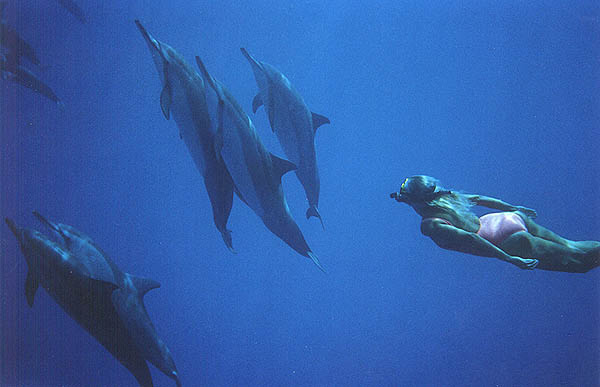 Welcome to this Conference website about
DOLPHIN & E.T. CIVILIZATIONS

I am happy to share with you my understanding about this event. I received the inspiration for this Conference while in contact with my extraterrestrial friends, the Andromedans. The dolphins and whales have also contributed in suggesting Presenters and guiding the thinking in the organization of this gathering. They are very pod-minded and they seem to encourage the coming together of kindred souls. I have noticed that contact with intelligent and compassionate extraterrestrial races adds immeasurably to my quality of life.

My contacts with the ETs occurred long before I met the dolphins. In 1976 in the company of Dr John Lilly at Esalen Institute, California, I communicated with inter-dimensional beings who said they were "as many as One, or as many as Nine" the entire range of our numbering system, and so I could call them THE NINE. They also said they are "as bright as the Light of Sirius" and so we would subsequently say they were from Sirius.

I remained in contact with these loving beings for many years. One day in 1984, during a meditation, I received a message from a different race who unexpectedly came through. They said they were aware of my energies and that I could work with them if I would like. They said there was a need for the Scientific-Technological world on Earth to come together with the Spiritual-Loving world and that I could help with this if it was my choice. Waves of gentle peace were all around me, and I felt inclined to say yes. When I asked who was communicating to me I received the answer: These are the Energies of the Dolphins and Whales.

At that time I did not know how to swim. Although Ocean is my name, I had never been in the ocean and I had no inclination to do so. In 1984 I also felt it was strange to be contacted by cetaceans and so I hesitated before answering. The deciding factor was the delicate sphere of light and gentleness that surrounded me. I felt a wonderful Love for these unseen beings and so I said yes. Soon after that the world-renowned visionary artist, Jean-Luc Bozzoli arrived at my home with his Art Presentation of underwater pyramids, dolphins and whales. We began traveling together to share the wisdom and love of the cetaceans. The energy of the dolphins guided us all the way and assisted the joyful presentations of art and messages to thousands of people in countries all around the world.

Because of these unusual first contacts, I have always understood the relationship between the dolphins, whales and celestial ETs. They are all working together with us to assist humanity into the Light….. into higher frequencies of evolution and consciousness.

Although I was aware of this, I knew that the timing was not yet correct to bring this information to the general public. It had taken the elders in the field, many decades to bring forth to humanity the reality of ETs in our skies, without adding the part about the dolphins and whales!!! And so I waited for a sign that it was time. I wrote about it in my books and I spoke about it as part of my teachings in my Seminars, but I felt sensitive about doing anything that might dilute the work being done by the UFO/ET community on Earth. It just wasn't time to bring in the Dolphin Connection to all of that. It remained a subject to be discussed in quiet small gatherings.

Now the time has come and I am overjoyed. The dolphins and ETs are present. Their loving energy will touch you deeply at the Conference. Thank you for being interested. Thank you for opening to hear the amazing truths of this relationship among ourselves, our dear dolphin cousins and our kind ET friends. I am pleased to present to you our Conference: DOLPHIN & E.T.CIVILIZATIONS

Joan Ocean is one of the nation's leading researchers in the field of human-dolphin and whale communication. She is co-founder of Dolphin Connection International, with Mr. Jean-Luc Bozzoli. Based in Hawaii since 1984, this organization explores the advancement of human consciousness, biophysics and spirituality by producing visionary films, books, artforms and Ocean Seminars encouraging friendships between people and ocean-swimming dolphins and whales.

Ms. Ocean's graduate degrees are in Psychology and Sociology. For twenty years she has studied the social behaviors and communication abilities of twenty-eight different species of cetaceans in oceans and rivers around the world.

An inspirational, heart-warming public speaker, Ms. Ocean is a child advocate, previously serving as a Counselor and Legal Representative for abused young people, while working with the Child Protective unit of Health and Rehabilitative Services in the State of Florida. Presently working with the Make A Wish Foundation in the USA and Japan, these organizations sponsor terminally ill children to swim with the wild dolphins. Joan has witnessed many miraculous therapeutic and physiological changes occurring in the presence of free-swimming dolphins while working with emotionally and physically traumatized clients. Ms. Ocean is also a Board Member of the Joyful Heart Foundation, N.Y.C, and a consultant to the Board of the World Healing Institute in Hawaii.

In 1988 she initiated her present on-going relationship with more than 200 Spinner dolphins in Hawaii, and with the Humpback whales of the Caribbean, an endangered species with profound wisdom to share with the human race. An author and video producer, Ms Ocean's internationally acclaimed books have been published in five languages. To educate people about dolphins and whales, Ms. Ocean offers human-cetacean workshops in Hawaii, Mexico, the Caribbean, the Azores Islands and the Bahamas.

She is also the mother of three children and has seven grandchildren who enjoy swimming among the dolphins and visiting the horses and donkeys at their grandmother's ranch on the Big Island of Hawaii.